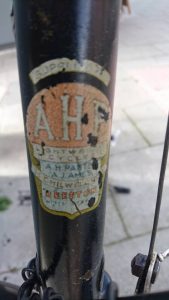 The original shop door can still be seen today at the left-hand side of the large showroom window. During this period the workshop was a wooden outbuilding attached to the rear of 39 Chilwell road which was accessed via Hall Croft.

Sid Standard took over the business and moved his family into the property above the shop.

Sid carried on in the original shop changing the name to ‘Sid Standard lightweight cycles’. He was now using the rear of what is now the Fireplace Boutique at 105 Chilwell Rd as a workshop ( The shop’s original workshop was demolished to make way for a small row of flats on Hall Croft ). As the new workshop location was far from ideal, being across the road, Sid looked for an alternative. It was then that the Laundrette that was operating from 37 Chilwell Rd became available, this was then to become the main part of the shop as it is today with a sizeable workshop to the rear all under one roof.

It was during this period that Sid employed ex Mercian frame building maestro Pete Riches to make the Sid Standard ‘Superbe’ framesets. These were hand built in-house and more on this can be found on the Superbe frames website.

After gaining significant recognition in the local cycle scene Sid retires in 2000.

Bill Brady purchased the business from Sid and changed the name of the shop to ‘Cycle Inn’.

Bill had an existing cycle shop in Lenton of the same name and he carried on trading with the two shops up until 2003. His original shop was demolished as part of a compulsory purchase agreement to make way for the Tram line which now runs along where the shop stood, Bill traded in the shop as it is now until his retirement in 2007.

After serving his apprenticeship under the watchful eye of Sid for nearly 3 decades, and working for Bill for eight years, Kev fulfils his dream of becoming the next owner of the business after Bill retires. During Kev’s time as owner, he witnessed considerable upheaval as the laying of the Chilwell Tram lines closed much of Chilwell Rd from 2013 to 2015. It was down to Kev’s tenacity and fantastic customer service that the shop continued to flourish, so much so that Kev eventually looks to sell on the business to alleviate the workload but still to remain on as an integral part of the shop.

Returning to his retail roots after 10 years working for a large Cycle and Motorcycle trade wholesalers Jamie purchased the business from Kev in the early part of 2016. Jamie brings a wealth of experience to the shop and is using this to keep the shop going forward into the future. 2016 also see the shop enter the digital world with a Facebook and Twitter page and later in 2018 the shop’s first website.

With Jamie working alongside Kev the shop continues to be a local hub for cyclists from all around the area.